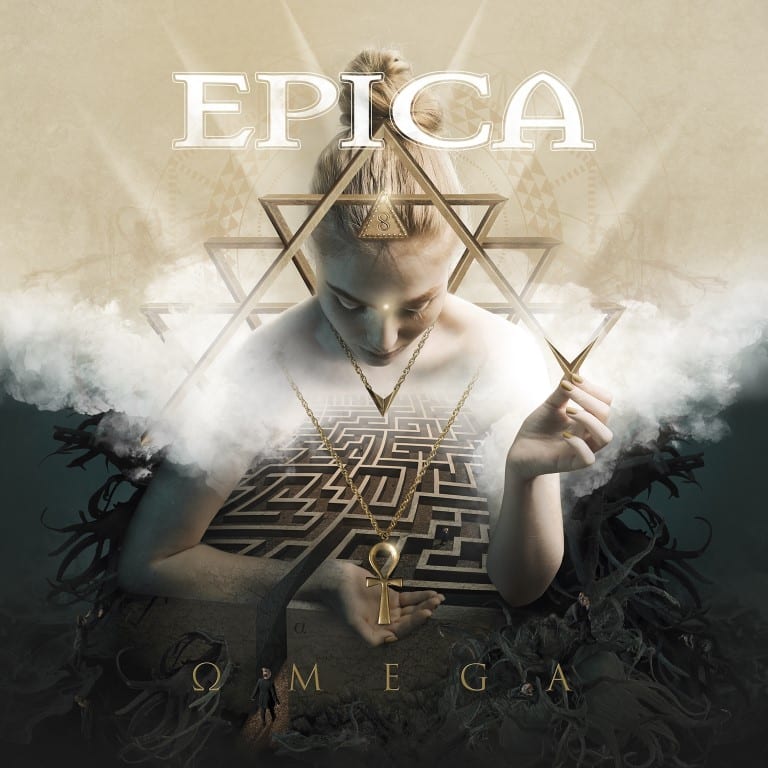 There is a reason Epica continues to be one of the pillars of the symphonic metal subgenre—they simply write really good songs and perform them flawlessly.  Omega, the band’s seventh studio album, continues that trend.

Epica has always been a band of contrasts.  Instrumentally, they mix heavy riffs with melodic orchestration.  And of course, vocally, they contrast grunts and growls from Mark Jansen (and, occasionally, Isaac Delahaye) with Simone Simons’s beautiful, operatic mezzo soprano.  Such disparate elements might be incongruous in the hands of lesser musicians and composers.  But Epica are masters of weaving together seemingly sonic disparities in a way that creates complex, lush soundscapes that can have the listener headbanging and longing for a wall of death one moment, while being brought to tears the next.  Omega brings a collection of twelve new songs that showcase all the elements that earned Epica their reputation as masters of the genre.

Structurally, Omega is somewhat typical for Epica.  Predictably, the album begins with an instrumental prelude before really getting going with its second track, Abyss of Time – Countdown to Singularity.  The album has a long, epic centerpiece in the middle with Kingdom of Heaven part 3 – The Antediluvian Universe.  Finally, the album closes with a shorter epic that closes out the album’s theme in Omega – Sovereign of the Sun Spheres.  But while the band’s decision to re-use similar album structures is a bit repetitious, this does not detract from the album at all.  Epica should not be seen as one-trick ponies who are unable to break out of preconceived creative strictures.  Rather, this album structure is one of their signatures, and invokes a degree of familiarity.  Just as much as Simone’s operatic vocals let the listener know they are listening to Epica, Omega’s structure is another important piece of the creative puzzle that is signature Epica.

Before even listening to the album, fans may be excited simply by noticing “Kingdom of Heaven part 3” in the track listing.  The song is indeed a continuation of the two prior Kingdom of Heaven songs from previous Epica albums.  This is not the first time Epica has revisited sonic and lyrical themes from earlier albums to create “meta-album” concepts.  The band followed a similar pattern first with The Embrace That Smothers, a collection of ten songs over several albums that explored what the band perceived as the dangers of organized religion.  The band again used a similar concept with A New Age Dawns, another collection of songs over multiple albums that explored a similar theme.  Kingdom of Heaven part likewise provides the next installment of a suite of songs that are unified behind a singular theme.

But while Kingdom of Heaven part 3 is a worthy epic centerpiece to Omega, it should not distract from the fact that the entire album is comprised of tightly-written, catchy songs.  After my earliest listens, I found myself endlessly humming the vocal melody from the Skeleton Key, the keyboard parts from Gaia, the riffs from Omega – Sovereign of the Sun Spheres, or the chorus from Freedom – the Wolves Within.  In the end, it does not matter how brilliant a meta-album concept may be, or how well an album is structured, if the songs themselves do not stand up.  On Omega, the songs are strong and make the listener want to revisit the album over and over.  And it is precisely because Omega has such a strong foundation in its songwriting that the added details truly take the album to the next level.  The album is heavy.  It is  melodic.  It is haunting.  It is pretty much everything I want Epica to be.

The musicianship is stellar, as always.  Guitarists Mark Jansen and Isaac Delahaye lay a foundation with their creative, yet not overly complex, heavy guitar riffs.  Keyboardist Coen Janssen brings a ton of variety to the table, sometimes playing orchestral keyboard patches, other times playing soft piano, and still other times taking a more electronica approach to his keyboards.  And the rhythm section of drummer Ariën van Weesenbeek and bassist Rob van der Loo drive the songs and provide the backbone and solid bottom end, at times, even taking the lead.

There is so much going on in a typical Epica song that the art of the guitar solo is easy to overlook.  It is a shame that much of the modern metal world has moved away from having guitar solos in songs.  When Epica chooses to include a solo in one of its songs, the solos are typically very well written and played.  What sets the solos apart on Omega is that they are not simply an opportunity for the guitarist to show off his chops, but play off the songs melodies and enhance the song overall.  If one can excuse the writer for making a Bon Jovi reference in an Epica review, Bon Jovi guitarist Ritchie Sambora shared some relevant thoughts about guitar solos in an interview in the mid-1980s that always stuck with me.  To paraphrase, the best guitar solos are not those that simply show off how many notes the guitarist can play.  No, the best ones are those that the listener will find him- or herself humming long after the song is over.  Those solos do not simply showcase how good the guitarist is—they showcase how good the song is.  I think Sambora was onto something.  This approach definitely describes what Isaac Delahaye and Mark Jansen bring to the table with the solos on Omega.  The solos on Omega are not lacking in shred.  But they first and foremost serve the song, are melodic, and feel integral to the overall structure of the song in which they belong.

Epica has undergone many personnel changes since its inception in 2002.  And although the band’s sound has evolved and grown since then, the band’s core sound that they established with 2003’s The Phantom Agony remains intact.  Sonically, Omega truly sounds like the next logical step in the band’s progression since 2016’s The Holographic Principle, with its heavy riffs, eastern motifs, and soaring instrumentation.  In short, Omega is signature Epica.

Get the album here